Last time I went to Coachella I camped in a tent on the grounds and it was an incredible experience. However, nothing beats waking up in a bed with air conditioning and the ability to take a nice long shower. It also helps when your friend’s house is in the beautiful Palm Desert perched within the mountains.

We woke up and had coffee and breakfast outside because they’re was a nice breeze and the sun was hidden behind some clouds which made it very pleasant to sit by the pool looking out at the mountains. After eating my brother Derrick and I were dropped off at the hotel down the street where the shuttle to Coachella would pick us up. Our friends were going to meet us later since they had to wait to pick up some family members at the airport.

The shuttle was wonderful, they were constantly picking people up. We were nervous that we would have to wait a long time for one to come but we pulled up and the bus was sitting there and as we were leaving the hotel another shuttle was pulling in. It was a nice air conditioned charter bus and our bus line only had 3 stops so we got to the festival grounds very quickly. The shuttle dropped us off right at the entrance and after scanning our bracelets and a bag check we were finally in!

Because the festival takes place in a valley out in the middle of nowhere with no shade, there are huge art pieces that people can side under to escape the sun. This year it was a giant astronaut on wheels that moved around the grounds as well as a tangled chord install and a huge dome covered in panels with live flowers.

After walking around and figuring out where everything was we started checking out the bands we wanted to see. We got pretty good at starting at one, watching it halfway, then moving to the next one to catch the last half. It really helped that we had a vague game plan before going in. We all picked which band was most important to us, my choice was Haim. I really wanted to see they’re whole performance and get a good spot which meant sacrificing seeing the shows that were before and after in their entirety. Because we looked at the schedule before hand, we were able to make a plan that accomodated both Derrick and I and allowed me to see all of Haim. We’ll be doing the same thing for Lana Del Rey since that’s Derrick’s pick.

After the mad dash of trying to squeeze 3 top bands that were all scheduled at 3 different stages within the same time frame we met back up with our friends. By this time we were all tired from being in the sun all day so we layed out our blanket and watched the rest of the bands from afar.

Finally, after the headliner Outkast performed we took the shuttle back home and immediately passed out. Ready for round 2! 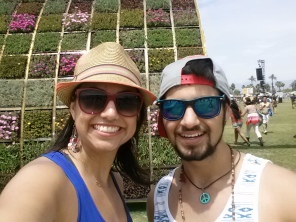 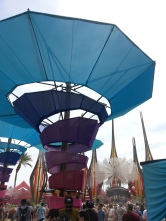 Do Lab where local DJ’s performed 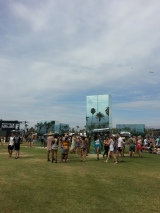 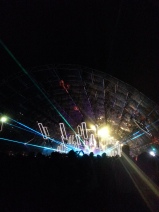 Tangled Install Piece that Lit Up at Night 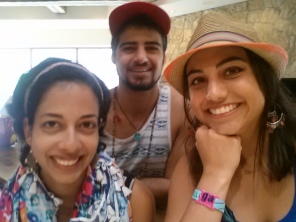 All Ready to Go

List of bands we saw today:
-Waxahatchee
-ZZ Ward (probably the top performer we saw today. She really knew how to get the crowd pumped)
-Austra
-MS MR
-Grouplove (awesome show!)
-Haim (they were amazing! Those girls know how to rock out and I love all their music)
-Bastille (also a great show. The singer even got down the stage and walked around the crowd while singing)
-Ellie Goulding
-Broken Bells
-The Glitch Mob
-Martin Garrix
-Outkast